An editor for osu!mania 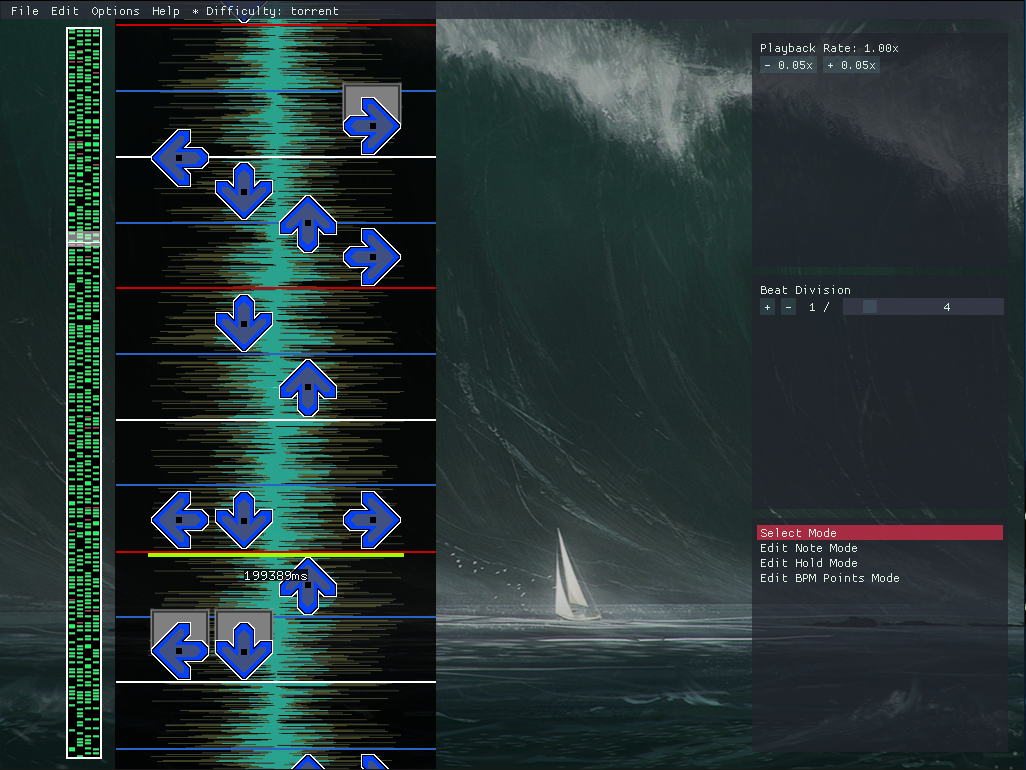 In this post I will bring up some of the more interesting and niche problems I encountered while developing Encore that you otherwise wouldn’t encounter developing tools and editors for other types of games.

osu!mania is a so called “Vertically Scrolling Rhythm Game” (VSRG), which is loosely based on games such as Guitar Hero, Dance Dance Revolution and IIDX. The point of the game, is to press buttons to their respective columns, where notes fly downwards (or upwards depending on the game) to the rhythm of the song. Score is given based on how well you time your button presses with the notes positioning in relation to the “hit receptor”, more info here. Those files that describes the levels layout to the song are called “beatmaps”.

The current official editor for creating these beatmaps is already solid as it is, but still lacks some significant features due to it not being updated for years. An example of this would be the amount of beat divisions supported. Currently, the official editor only supports 1/2, 1/3, 1/4, 1/6, 1/8, 1/12 and 1/16 beat divisions, which is not enough considering that some songs uses uneven beat divisions such as 1/5 and/or 1/7. Other features that the current editor lacks are features such as “freeform” note placement (allows you to place the note at any milliesecond in the timeline, for more freeform type of songs), a visual waveform of the song, and changing the songs pitch in realtime which allows you to listen to the songs details more closely.

Lastly, I’m personally a beatmap creator, so creating maps with my own tool allows me to constantly improve, develop and iterate the editor with new features that also could serve other beatmap creators alike, who also serve as a great source of feedback which helps me to further my experience in creating specialized tools.

Rendering notes that are on screen from a big collection

As the title suggests, the problem here is rendering notes that are on screen from a big collection, while still maintaining the ability to scroll through the entire beatmap dynamically. First, we need to declare how a “note” is defined. A note is defined by a timepoint which represents where the note is in the song in milliseconds (the format that osu! is using), and a column, which describes which column the note’s in.

In this case, I represent a note as a struct since I find it more convenient to let data be data, which also serves as a preperation for binary saving/loading of beatmaps in the future.

The naive way of doing this would be to iterate over every note in the beatmap, and check which ones are on screen and then render them. The issue with this approach is that the performance is bound to the size of the beatmap in question, which could be described as a O(n) complexity. In this case, we wan’t something close to a O(1) complexity, since you should ideally be able to create beatmaps based on all types of songs, which includes longer ones.

The solution to this is to essentially keep the notes in their collection sorted after their timePoint, and keep track of an index of where the screen’s first visible note is. Everytime the user decides to scroll in in the timeline, the index gets updated in relation to it’s last value.

myLastObjectIndex is the index of the first visible note, GetScreenTimePoint is used to translate the notes timepoint to a visual point on screen in relation to where the user is in the timeline. As soon as noteTimePoint is bigger than 0, it means that the first note is visible on screen. From that on I iterate from the current note index, render all those notes and as soon as one of the note’s visual timepoint is bigger than the screen height, I break the for loop. This only works if the note collection is sorted after their timepoints. But as a result, the rendering performance of the notes is not limited to their collection size, but rather how many notes there currently are on screen. The only place where I can see it being a bit iffy performance wise is when the user jumps in the timeline. But as it turns out that is not really an issue, since it only needs to recalculate myLastObjectIndex once per jump. It’s also worth to mention that T is a template argument, since the class where this code snippet is in is templated. This is mainly because there are more object types than note that can be rendered on the timeline.

With note rendering in place, I was worried about the next potential performance hog. Since the note collection needs to be sorted at all times, inserting a new note means that I would push back the new note into the collection, and sort it. With std::sort this is surprisingly fast. Why? Well, looking at the Visual C++ implementation for std::sort, we can see that it uses a combination of quick sort, heap sort and insertion sort for different cases. All of these cover most cases, including if the collection is mostly sorted, which it is in my case.

Although it works well in Visual C++, this would have to be revisited if I ever decide to port it over to another platform such as Linux, or even Mac, since entirely different compilers would have to be used, which could potentially have a different implementation of std::sort.

Something that many users of the official osu!mania editor have been missing, is a waveform. A waveform is useful for all kinds of things, such as visually pointing out where sounds starts and ends, which helps a great deal with timing your beatmaps. To draw the waveform, I need first and foremost the audio data. To ensure the best compatability with osu, I used the audio library BASS, which is a commonly used C library for playing audio. BASS does have a few low level functions for situations just like these. So through the documentation I found BASS_ChannelGetData(), which returns a pointer to the audio data.

Instead of drawing individual lines of the waveform every frame, I used ofFbo’s to pre-render the waveform into “slices”, and saved them in a std::vector. This way, I could figure out which slice to render based on the current time, and only render the visible slices on screen.

For rendering, it was as easy as finding the index of several screenpoints with (timePointMS / myWaveFormSliceSize), and rendering those slices with that index.

DrawWaveFormSliceAtIndex is used to draw the slices based various editor parameters.

As I mentioned before, I used the audio library “BASS” to ensure maximum compatability with osu!. But what does “compatability” mean in this case? Well, as it turns out, using a different audio library than BASS will in most, if not most cases result in an audio offset. Essentially, if you were to get the current playback time of the playing audio, the result would vary from BASS to other libraries. This is due to BASS having a different encoding/decoding method when it comes to audio files than other libraries. This issue becomes the most apparent when you for example try to convert an osu!mania beatmap into another game, such as stepmania, and vice-versa. The beatmap will gain a noticable audio offset, which in most cases varies from -30 to -70 milliseconds. This further makes this type of tool development more interesting, since it’s one of those issues that you wouldn’t expect being an issue in the first place.

How you place notes and holds alike, and removing them.

If you copy a selection and paste it, you will get a preview of the paste and allowed to place it where ever you like.

Showing how you can navigate the beatmap, and that zooming in and out is possible.

This is how you edit BPM points, which are used for snapping notes and holds to the beat.

All keymodes from 1 key to 16 keys are supported.

I’m happy with how Encore turned out, as it is my current editor of choice when creating beatmaps. I learnt a lot of interesting things from developing it. Developing a tool for an actual game that others could use was a giving experience, since I encountered problems such as compatability, adhering to file formats, and specific niche issues that’s almost exlusive to the game in question. Developing a tool doesn’t require any general knowledge, but rather requires you to study what you’re developing the tool for closely because of those niche issues.